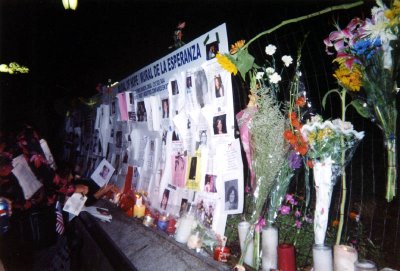 "It is hoped that an 'optimism' for our future
may flow from the lesson learned from our 'tragic' past."

-- Viktor Frankl, Man's Search for Meaning
For several reasons, I’ve never been able to sit down and write about my own experiences on 9/11 - partly because it was such a painful day, but moreso because I just felt that it wasn’t necessary. Everyone has written about 9/11. I just reviewed four volumes of 9/11-inspired comics and not a day goes by where some television channel or newspaper doesn't mention 9/11. Still five years later, terrorism dominates the political discussion in this country. So when I decided to finally sit down and write about my own experiences, I kept asking myself: do I really have anything new to offer? I didn’t lose anyone close to me, nor had I suffered other than the shock of simply being so close to the actual events.

I also felt like anything I would have written back then would have come off as an angry rant, rather than a coherent and thoughtful piece. For a long time, perhaps several years, I was furious. Furious at the utter senselessness of the act itself, and the terrorists who believed so strongly they were making a difference that they sacrificed their own lives for it. Furious at the hopelessness (not to mention cluelessness) of our government and it’s ill-conceived retaliations against Afghanistan and Iraq. Furious at the bloodthirsty bigots in this country who ignorantly targeted anybody they labeled as a foreigner, as if all immigrants were radical Muslim extremists. Furious at the mindless, knee-jerk patriotism that ran rampant throughout this country. Furious at the sensationalistic, opportunistic media who recycled footage of the Twin Towers burning and collapsing about every five minutes, ensuring that we remain in a permanent state of shock and horror. And I was furious because I knew that, on some level, the terrorists had succeeded in scaring us, and “filling our country with fear.”

But now, five years later, it feels like the right time to finally chronicle not only what happened to Rachel and I that day, and the week that followed, but also to try to make sense of it all, to understand what it all meant. I don’t know that I’ll be able to offer any new and astounding revelations that haven’t already been written by far better writers than me, but I will, at the very least, preserve the memories of my experiences. 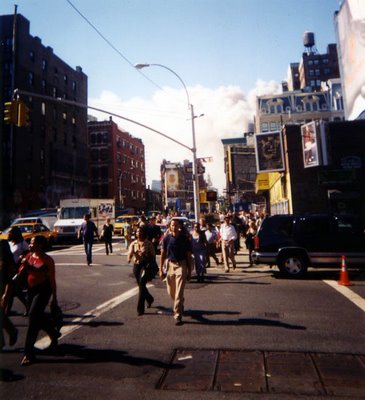 The morning of 9/11, Rachel and I were on our way to meet a real estate agent about an apartment in the Lower East Side. We had only arrived in New York City two days before (from London, where we had lived for the last three years), and recently engaged, we were excited to start a new chapter in our lives together.
When the first plane hit, we were on the downtown 6 train, between Union Square and Astor Place. 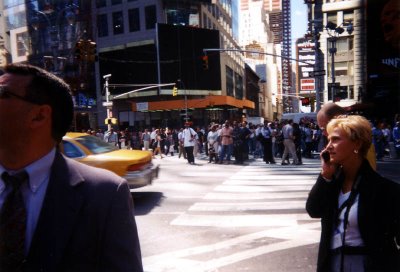 Walking through Times Square was also a surreal experience. Thousands of people stood in the streets mesmerized by the ceaseless news wires wrapping around the buildings with the latest updates. I don’t know why it hadn’t occurred to me before, but until that moment, I hadn’t thought to try to call my family. I had only purchased my cell phone the day before, so no one had my number and I didn’t have any phone numbers programmed in yet, but I figured if I could get in touch with my parents, they would tell everyone we were OK. Of course, I tried about thirty or forty times with no luck. There was a signal, but the calls just weren’t going through. We kept walking and after about an hour of trying continually, I got through to my mom just long enough to have this conversation:

“We’re fine, we just…” and then the line dropped. But it was enough for her. She called Rachel’s parents and let them know we were ok.

We finally made it back to the hotel around 2:00, and when we walked into the lobby, there were hotel security guards everywhere. Apparently as soon as the attacks happened, there was a rush on the hotel and people stranded in the city bought up all the rooms. The hotel lobby was completely overrun and the guards were only letting people in with a room key. Thankfully we had the room reserved for three more nights, or I’m not sure where we would have stayed. We went up to the room and like the rest of the world, watched the news. We didn’t know what else to do.

I would be lying if I said I didn’t have doubts about staying in New York after that. I started thinking about moving to other, safer cities, but in the end, we knew that this kind of thing could happen anywhere (remember Oklahoma City?) and that we couldn’t let the terrorists scare us into living our lives in fear. Besides, I had a job I was excited about.

That night, we walked up to visit one of my best friends who lives on the Upper West Side. He worked in the building literally right across the street from the World Trade Center and we were really worried about him. When we got there, his roommate was there, and let us in, but he was not back yet. We decided to hang out and wait and finally, he showed up, as visibly shaken and upset as I've ever seen him. He had arrived at work just after the planes hit, only to discover that his building was being evacuated, and he had to turn right around and walk home. He showed us a scorched business card of a woman who worked at American Express – 99th Floor of the North Tower, which had literally fallen from the sky onto his head. Though we all felt strange about it, we decided we had to eat, so we went out to dinner at a local restaurant, which strangely was packed. Of course, everyone was talking about the attacks, and there was a large screen TV which was playing the news. There was a lot of emotion in that restaurant and I remember feeling very uncomfortable there, though after such a long walk, we were all starving. 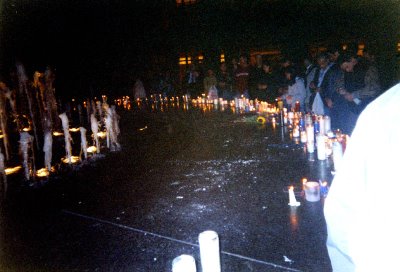 The rest of the week was a whirlwind. I remember the stench of smoke and decay that enveloped the island for days. I remember thinking what a great leader Mayor Guiliani was. I remember attending a very moving candlelight vigil in Union Square that was literally packed with thousands of people, many screaming for retaliation, other praying and singing for peace. I remember the thousands upon thousands of missing person flyers that blanketed the city for weeks, and how painful it was to see them and think of the poor people waiting on the other end of the phone for a call that would never come. I remember Rachel and I going to the Red Cross blood center the following morning only to find a crowd of thousands waiting in line. Most were turned away as the Red Cross simply couldn’t process that many people. I remember getting e-mails of concern from people I had not spoken to since high school, asking if I was ok, and wondering how they even knew we were in New York.

It’s incredible to me that it’s been five years already since all of this happened. These memories are still so powerfully vivid. I still have dreams about that antenna falling over and still to this day, I wake up wondering where such hatred comes from.

I wonder a lot of other things, too. I wonder if there will be another terrorist attack in New York, and if the City could recover from a major attack in its subway system. I wonder if the Towers will, or should, ever be rebuilt. I wonder if the terrorists who organized the 9/11 attacks feel like they accomplished anything. I wonder if the world is a better, safer place now, or if we’re simply more scared and isolated than ever. I wonder if our government could have done something to prevent this, or if the cost of freedom is that we’ll always be vulnerable. I wonder if all our heightened security measures and amber alerts really do any good, or if they just remind people that our lives could end at any second. I wonder if people outside New York really get what happened, and how it transformed this city, or if it was just some really good TV show to them. I wonder if the families who lost loved ones have been able to come to terms at all, or if grief like that never heals.

Still today, five years later, I have no answers.

I wonder if I ever will.